It's now four years since I began this blog, and two years ago I took the opportunity to reflect on the state of film as I then saw it. Appropriately for my 100th post, a further two years, on it's worth reviewing film photography once more. For black and white film at least, the market of available films has been stable, if not actively positive, with more new films appearing than being discontinued; as colour film tends (or tended) to be made by the bigger companies in larger volumes, this appears to be going through a period of rationalisation, although as I very rarely shoot colour film, I am not so aware of issues of its availability and as a result, it is a little outside of my review here.

After the demise of Fotokemika, which affected a number of their lines, Adox has continued to produce film, paper and chemistry. Their 'type II' versions of CHS 100 and CMS 20 films replaced the no longer available original films, and Adox also introduced the entirely new Silvermax 21/100 (which I've tested and liked the results), available in 35mm and Super 8 as Pan-X Reverso.

Notable discontinuations include Kodak BW400CN, a film I have used in the past, but only when unable to get Ilford XP2, which leaves XP2 as the last C41 black and white film. Meanwhile Ilford have had problems with Harman Direct Positive Paper due to Ilford Imaging Switzerland, a separate company which made the emulsion, closing down. Macodirect are currently selling Imago Positive Paper, which is apparently the same emulsion coated onto different paper, and presumably there is a limited supply of the stuff, although I have only previously used the original Harman DPP.

Of Macodirect's wide range, the excellent Rollei RPX films have been supplemented by a RPX 25, and this, as well as RPX 400, are now being manufactured as sheet films. For the large format photographer, this has provided a welcome medium-price range, between Foma's black and white offerings, and the higher priced Ilford and Kodak films.

Finally, although it pertains to colour film, perhaps the most exciting news of recent months has been Film Ferrania reaching their Kickstarter goal to allow them to begin to process of making colour reversal film once more - in 35mm, 120 and Super 8 and 16mm formats- in a scaled down refitting of some of the old Ferrania factory buildings in Liguria. The original company had been bought by 3M with the result that the Ferrania name itself disappeared for decades, but within five years of the factory closing down, the first batch of new Ferrania film is scheduled for production this year.

Posted by Nicholas Middleton at 17:49 No comments:

In my post, Twenty Years Since, I wrote about my first experiences developing black and white film while on a foundation course in art and design in 1993. Subsequently, as part of my degree course, I had another introduction to black and white photography in February 1995. This time we were given one roll of film per student, rather than having to share. I shot my film with the Praktica BCA which I had bought to replace the BC1 which had been my first SLR camera. The day before the photography introduction I'd bought a 28mm lens (originally £40, and, although secondhand, I asked for a student discount and was given 10% off the price - as a point of comparison I was paying £39 a week rent on my room in the student hostel at the time); and I had also found a book in the local library in which had a page on push-processing. This was a technique that I had not previously used, but wanted to try because I had heard that the film we were to be given for the introduction was 100 ISO, which I thought would be too limiting to use in February: the film we were given was Jessops 200 (which may have actually been Efke R100, according to this thread here) and in the event I shot most of the film using a tripod and with the camera's self timer. I rated the film at 800, which I recall produced a bit of a sharp intake of breath from the photography tutor, who suggested a time twice as long as indicated for box speed, and in neat ID11 (rather than 1:1). I developed the film for 18 minutes at 22ºC, having heated the developer above 20ºC, and was too impatient to either wait for it to cool, or stand it in cold water to speed its cooling.

The prints that I produced were a series of self portraits in a semi-fictional day-in-the-life. At the start of the introduction, we had been given a slide show, which was mostly about artists using photography rather than photographers, if such a distinction is still meaningful. One of those was Cindy Sherman, which may have influenced my choice of subject matter. I had also made my own negative carrier specifically to allow the film rebate to be shown. This comes across as something of an affectation now, looking back at the prints from the distance of twenty years. At the time I was interested in artists' books as a form, and I made a cover to contain six prints of the images from the introduction. This also had a cover page to which I had given the title 'How Is The Author?' This came from an abbreviation of a Richard Pettibone piece which had appeared on one of our history of art slide lists as 'How Is The Author'. Retrospectively, the images featured in the first post Twenty Years Since have aged better: as the first photographs that I was developing myself, with my first SLR camera, not uncommonly, I was concerned with formal qualities in most of the photographs, or, with the photographs of the route of the M11 Link Road, the documentary concerns have increased in interest with time. By comparison, the photographs from my second black and white photography introduction do have the feel of juvenilia to them. 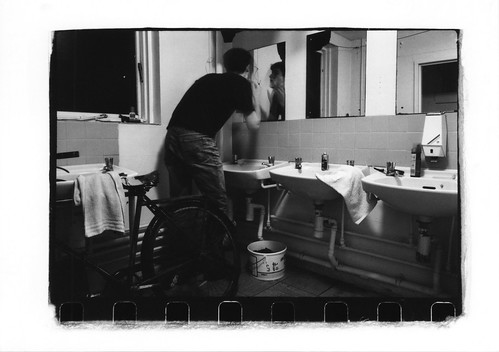 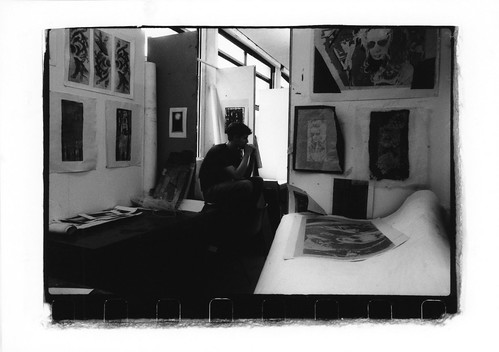 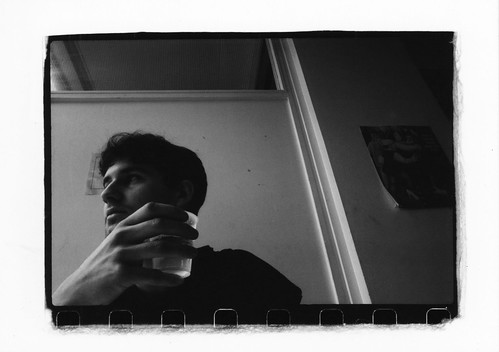 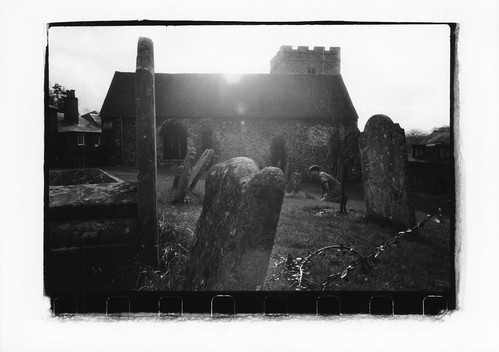 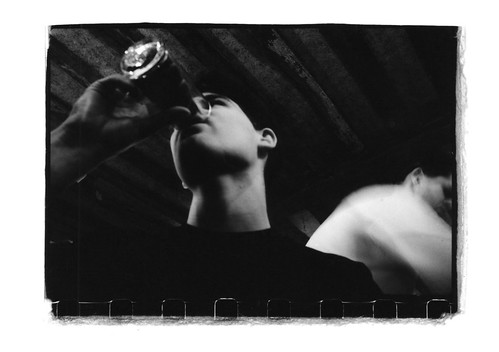 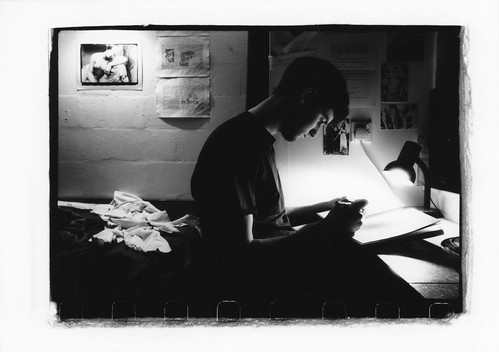 Posted by Nicholas Middleton at 09:50 No comments: