When one gets a reputation for an interest in 'old cameras' (old as being short hand for film), not entirely unfrequently, I find myself being given cameras. One recent gift was a well-used but well-cared for Canon FTb-N. On the camera itself, the model name FTb is engraved on the body, without the N-suffix, but the FTb-N is easy to distinguish from the earlier FTb by the redesigned stop-down lever: on the previous model this is larger and unpainted with a leatherette inset patch - and in addition the PC flash socket (on the other side of the lens) lacks a cover. The advance lever gained a plastic tip and, one further change, not visible externally, is that the shutter speed is now visible in the bottom left hand corner of the viewfinder. Although sometimes written FTbn or FTbN, the Canon Camera Museum uses the name Canon FTb-N, which should be the authoritative version.

The evolution of Canon's F-series SLR cameras began with the FX and FP models from 1964; the lens mount was redesigned with the Canon F-1 in 1970. The FTb of 1971 has this newer FD mount, but the name derives from the earlier Canon FT QL of 1966: the FTb (and FTb-N) was an upgrade of the FT QL with the new FD lens mount. The "improved" FTb-N model has sufficiently small revisions that would appear not to be distinct enough to have the N engraved on the camera body. Canon also produced a simplified version of the camera for overseas markets, released as the TX in 1975.


The code printed inside this example confirms it was made in December 1974 in Canon's Fukushima plant. Having previously used Canon's A series SLR cameras, mostly the A-1, there are some similarities in design and feel to the FTb-N. It is bigger and boxier than the A series, and notably taller in the body, which hints at its design being older, bridging the gap between the first generation of Japanese SLR cameras, and the later 1970s iterations with more compact, refined designs. The FTb-N does share the same lens mount with the later A series, providing compatibility with all of Canon's FD lenses; in addition, the FTb-N can also use FL and R series lenses but without full aperture metering.

The FTb-N I was given came with the standard, older breech-lock f1.8 50mm FD lens; it also had a Vivitar 70-200mm zoom and a Canon 135mm lens which, unfortunately, was cloudy with fungus. Most of the functions on the FTb-N are very much familiar classic SLR territory: manual focus, single stroke film advance, cloth focal plane shutter with speeds of 1 second to 1/100th and 'B', threaded shutter release with a lock position (that can be used as a 'T' setting), manual rewind, hot shoe and PC flash connectors.

Other than the TTL meter, the FTb-N is entirely mechanical. The lever located around the rewind crank turns the light meter on and off as well as featuring a battery check function at 'C' (the meter is also set to 'off' for using flash as indicated). The battery was originally a mercury PX625, for which modern replacements are available; the battery compartment is on the side of the camera, below the rewind crank, rather than in the bottom plate. Metering itself is a fairly common match-needle arrangement inside the viewfinder: the shutter speed/film speed selection is reflected in the sensitivity of the needle's response; turning the aperture selection ring moves a second needle with an eye to match the first. Film speeds, in ASA, run from 25 to 2000 in a window within the shutter speed dial. There was also a low-light meter-booster accessory available, which fitted to the hot shoe.

Although the 'new' model status of the FTb-N isn't marked on the camera body, the QL badge stands for Canon's Quick Load system: a hinged plate inside the camera assists accurate loading. The film leader has to be placed up to a red mark inside the camera, and then the plate folds flat on the the film, designed to make loading fool-proof. When advanced, a series of rotating sprung rubber feet use friction against this internal plate to pull the film into the take-up chamber. In practice, I always check 35mm film is correctly loaded by watching for the rewind crank turning when film is advanced; the QL system removes the necessity for slipping the end of the film into a slot as with most 35mm cameras, which can sometimes be fiddly. Canon used the QL system on a number of cameras, both SLRs and rangefinders, for a number of years, but I imagine the extra complexity in production balanced against the perceived ease of loading proved of insufficient benefit, and the feature wasn't used on the A-series SLRs. 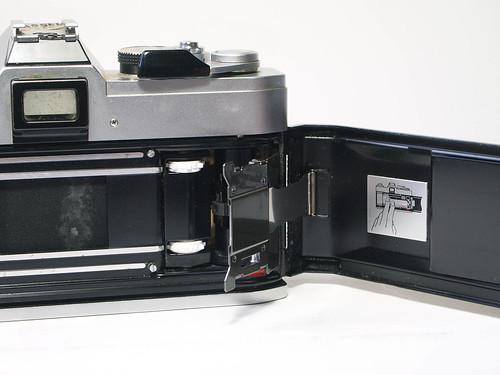 As well as the QL system, another interesting design feature of the FTb-N is its multi-function stop-down/self-timer lever: pushing the lever towards the lens stops down the selected aperture; rotating this 180º away from the lens sets the self-timer; under the lever is a second, smaller lever, which selects 'L' to lock the stop-down lever, 'M' to lock up the instant return mirror, or a white dot for 'unlocked' functions.

Using the FTb-N was very much like experiencing a simpler antecedent to the far more sophisticated Canon A-1 which I used for most of my 35mm photography for many years: most of the user controls, although less advanced, are in much the same places. The largely metal, mechanical camera feels quite solidly made in use, and its relative simplicity ensures that there are few distractions when shooting with the FTb-N; one of the few aspects of the camera that wasn't entirely to my liking was its focus screen - having been used to shooting SLR cameras with split central image circles for focussing, the FTb-N just has a microprism patch in the centre with a slightly darker rectangle around it to indicate the meter area, this I found makes fine focussing take just a little more time and attention than the clarity of a split image.

Keen to keep this camera-themed day going, and with just under two weeks to go, this year, Tuesday 28th February is 'Take Your Box Camera To Work Day'. Looking back at previous years, it's frequently been on the 28th (or 29th February), so it may be good to define it simply as the last week day in February each year. The concept wasn't mine, but I have intermittently attempted to promote it in recent years, as camera- or film-themed days have become popular; it's just another excuse to shoot film. Of course, there are a number of considerations around shooting a box camera in a work environment: not all work situations are amenable to such behaviour; and, with most work generally being inside, the fact that box cameras are designed for exterior daylight shots, one needs to adopt strategies for achieving a decent exposure, often involving either using fast film (or push processing), or 'B' settings for long exposures, or both.


For those posting on Flickr, in the Box Camera Revolution Group or elsewhere, including Twitter, the tags 'TYBCTWD' and 'TYBCTWD17' will help identify shots from the day. Although I've taken it upon myself to promote the concept, I don't intend to adjudicate if photographs were shot at work, or on the day itself, still less to define what precisely constitutes a box camera: the spirit of the day is what counts for anyone willing to participate.