Having had some success with using a number of different types of vintage glass plates, I wanted to design a project to use them for. These glass plates are a finite resource, although they do appear frequently in online auctions (photographic plates are still manufactured, but only for very specialist applications, and are prohibitively expensive). So, to use those plates I've already collected, I decided to undertake an ongoing project of urban night photography. There are a couple of examples in my post on Ilford G.30 plates, although it was only when photographing the disused cinema that the idea began to formulate.

With the exception of the Ilford G.30 plates, most of the plates I've used are from previously opened boxes, which does mean that there is a chance that contents may have been exposed to light at some stage in their history. This has only been the case with the Mimosa Porträtyp-Antihalo and Kodak B 40 plates, and it hasn't been all of the plates in the box. The Mimosa plates have nothing to date them securely, but these could be as old as 1930s-40s (the box says these are "Made in Germany" and presumably date from before East and West Germany). I shot a test of these, which did come out with heavy fogging, and a number of Kodak plates. I have been systematically testing the plates in my Icarette L with successive exposures to a get a rough idea of the exposure needed.

Some of the plates were originally for specialist applications, such as the Kodak B.4 Half-Tone plates, which as the name suggests, are high-contrast; many of the plates are not panchromatic, meaning that they can be loaded under a safelight, useful when there are loose plates in a box, making it easier t to determine which is the emulsion side. The safelight for the B.4 Half-Tone plates is given as 'OB'. Although OB doesn't appear on Kodak's safelight data sheet, all the other 'O' series safelights are yellow. Considering the given safelight for these plates would be yellow, I made a guess that these are blue-sensitive only and loaded the plate under a red safelight. (Given my limited experience of different Kodak plates, panchromatic plates have a 'P' prefix, orthochromatic, 'O', so it would make sense for blue-sensitive to have 'B' - although I have found nothing to confirm this).

Two previously unopened boxes of plates I've made tests from are Kodak P 300 Special Rapid Panchromatic and P.1600 Panchro-Royal plates. As sealed boxes, these have information sheets inside, useful for the original meter settings and developing times: I've posted the P 300 Special Rapid Panchromatic sheet and the P.1600 Panchro-Royal sheet on Flickr. I've generally been using a starting point of increasing the exposure by 1 or 2 stops for the tests to compensate for the age of the plates, then the succesive exposures provide a more accurate exposure index to shoot with. Although both boxes were sealed, the Panchro-Royal plates have not aged as well as the Special Rapid plates, which are 'tropically hardened': this may or may not have an effect on the longevity of the emulsion.

Shooting them at night adds an extra layer of difficulty and not only in terms of getting the exposure right (I haven't touched on reciprocity law failure). The shot of the ghost train below proved hard to focus, even with the lens wide open at f4.5: the image on the ground glass screen was very dull, simply because the scene was at a considerable distance from any streetlights. Stopping down to f5.6, I calculated a ten minute exposure. Using a smaller aperture with greater depth of field would have meant that the accuracy of focus would be less critical, but this would have given much longer exposure times. The 4x5 G.30 Chromatic glass plates (shot with my MPP Micro-Technical Mk VI camera) are still the best plates I've used, and both subjects using them on this post were well-lit, in terms of night photography.

Posted by Nicholas Middleton at 14:32 4 comments:

I set up this blog a couple of years ago specifically to write about film based photography, so to write about the changes to Flickr are a little outside the remit I have given myself, yet my recent engagement with photography would probably not have happened without Flickr. I started using Flickr nearly six years ago as a way to contribute to Camerapedia, and followed the disgruntled contributors of that site to Camera-wiki when Camerapedia was turned into a commercial site. Through Flickr I've learnt and shared new knowledge about methods and techniques, cameras and film, and have enjoyed being part of a community, one of the best online.

I logged into Flickr this morning to find that the user interface had changed. Although aspects of some changes had previously appeared elsewhere (such as in Group pools), the complete overhaul of Flickr was a surprise: the thrust of the redesign appears to be to make Flickr smartphone and tablet friendly, with a frictionless mosaic of images that the user can endlessly scroll through. However, as a maker of images I want mine to have friction: as someone who occasionally exhibits work, the space around the image greatly reflects on how that image is seen. The new interface delivers up something like Google images, a levelling down rather than a levelling up. These complaints about the design, in overview, might appear just a natural reaction to change, a desire to return to the familiarity of a system I've used for a number of years, if the changes worked.

I'm using a PowerBook G4: it is an old laptop, though it will load and display most web pages, but not the new Flickr. When I click on the link to my Photostream I get this: 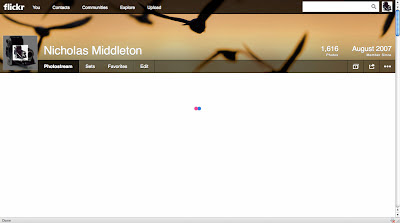 Firefox seems to think the page has loaded, but it just hangs. The generic cover photo strikes me as a terrible assumption: why the designers did not leave this blank, or greyed out, as a default, rather than adding someone else's photograph as the users' default cover image. To get to something that appears like the old Photostream, you can click 'Edit', which brings up a page like this: 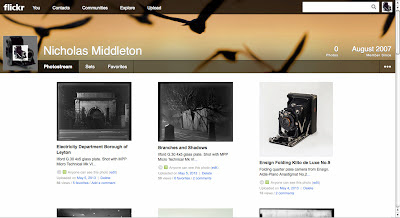 Before the changes, to 'edit' the titles of photographs in the Photostream, it was a simple matter to click on the text and edit it. This no longer works for me, making the 'Edit' button a bit of a hollow promise. Clicking on individual images brings up a screen very like the old Lightbox view: 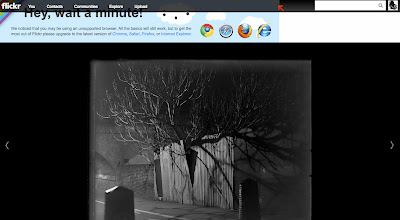 At the top of the image is a warning message I get for using an out of date browser. Previously I was able to close this by clicking the checkbox at the top right of the image (arrowed in red): the warning message did not reappear until I logged in again. With the new interface the checkbox is underneath the grey bar and cannot be clicked on to close the message, so it now appears on every photo page. My laptop won't run a newer version of Firefox, so I'm stuck with it. The old Lightbox view was not a bad way to view single images, but it's now the only way. Scrolling down the page, the junction between the black background and the white is rather ugly to my taste: 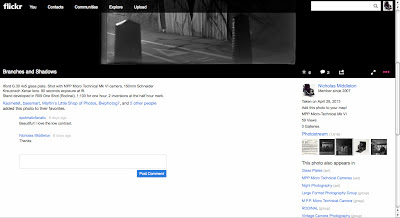 Many of these changes are cosmetic, and using a newer computer (or smartphone, or tablet) would no doubt improve my experience of them. However, as a Pro user who has paid for this service for a number of years, my standing to this ill-thought-through redesign is rather different, for example, to when Facebook unveiled the 'new Facebook': with a free service one expects to have to accept changes in interface and functionality as a result. It appears that Flickr no longer values its Pro subscribers: Flickr now offers 1TB of space free (free users were previously limited to 200 images), and this denigrates the distinction of having paid for a service, when that service significantly changes. Today, the first day of the new interface, the feedback appears overwhelmingly negative, with perhaps over 90% against. The redesign must have been thoroughly tested I assume (although it looks like they didn't test it on older systems with slower bandwiths), but did they test it with any photographers?

A version of the cover photo appears when clicking on the profile icon: 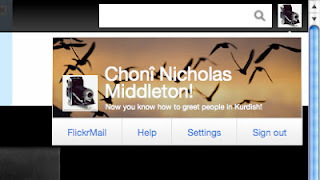 I can't help but think that it represents flocks of long-standing users leaving to find a service that values them.
Posted by Nicholas Middleton at 21:35 1 comment:

Once a year Ilford invites orders to manufacture film in a number of non-standard or obsolete sheet film sizes. It's known as the ULF film order, but it isn't restricted to ultra-large format film. Although it is possible to cut smaller sizes of sheet film from 4x5 or 10x8, it's a great advantage not to have to do this oneself for a number of reasons. I've got a box of HP5 Plus in 9x12cm format, to use with my Recomar and Avus cameras, which must have been produced from the ULF order (although I didn't specifically place the order for the film size myself).

Of the sizes Ilford are proposing to supply this year, the announcement of HP5 Plus in 50ft lengths of 46mm, the size of 127 format, has caused a little excitement: since Fotokemika stopped production last year, there has been a niche, admittedly small, to be filled in the roll film market. Obviously this does still mean rolling lengths of the film with 127 backing paper, but it removes the need to slit medium format film down to size.

The deadline for orders this year is Friday 28th June. For more information see Ilford's website: http://www.ilfordphoto.com/products/page.asp?n=137
Posted by Nicholas Middleton at 21:00 No comments: