Sometimes I acquire cameras almost by accident. After using the Ensign Folding Klito earlier in the year, I bought another quarter-plate format folding camera as it came with a full complement of a dozen plate holders, and probably would have paid around the same amount for the plate holders on their own. However, these metal holders were not compatible with the Klito: the Klito holders have a single 'lip' on the left and right edges and none at the bottom. These particular holders in comparison have a double lip at both sides with a single lip at the bottom edge which meant that they were not interchangeable. It's an issue not uncommon for early plate cameras, as many manufacturers had their own propriety designs, especially it seems around the turn of the century; only later was there a degree of standardisation amongst different camera makers.

The camera that these holders came with was a Butcher and Sons Cameo (on the camera itself is a small brass name badge with The "Cameo").  I've already written about Butcher and Sons in discussing the Midg: their cameras were made in Germany and then badged and sold by Butchers - with most likely some other elements of finishing by Butchers, notably that the Cameo has a British-made lens in a German shutter. The camera itself was almost certainly made by Hüttig, or Ica - of which Hüttig was a constituent when Ica was formed in 1909: the 'Cameo' is listed as a plate camera under the Hüttig page on Camera-Wiki, but does not appear as a 'continued model' on the Ica page, although this may just be an omission (however, the Cameo also does not appear under the comprehensive Ica cameras list on From the Focal Plane to Infinity).

Research online turned up scans of a Butcher and Sons catalogue from 1914, which was invaluable for precisely identifying the model. There are four versions of the Cameo listed: my camera corresponds to the Model O, surely a back-formed name: the others are named with Roman numerals I, II and III (the 'Uno-Cameo'); the O is a simpler, cheaper version. It does appear to be named with a capital 'O' rather than a zero, although whether anyone referred to it as a "Model-Oh" seems unlikely. To add a small amount of confusion, the Model O is divided into five variants based on lens and shutter combinations: my example is the middle of the range Model 03 (the other Cameos, although having a wider variety of sizes, lenses and shutters are not burdened with a further model name in the catalogue). The catalogue states that "The Model O "Cameo" has for fourteen years held the lead as the most serviceable, most practical, and most valuable Guinea Folding Pocket Camera on the market, and for this reason has become famous the wide world over. The 1914 pattern has been entirely remodelled, and is now as perfect as is possible to make it." As an importer of cameras from Germany, the outbreak of war that year was significant: it resulted in Butchers forming a partnership, and then an eventual merger, with Houghtons in order to stay in business.

The Cameo itself is a fairly well-constructed example of a typical plate camera of its time: leather-covered wooden body, with a metal drop bed, removable wooden back for the ground glass screen, originally with a hood, missing on my version. It has a large brilliant finder, without a spirit level. It also lacks a wire frame finder, which I prefer for shooting handheld. The bellows are single extension only, and focus eschews a rack and pinion device for the simpler expedient of using the spring clamps, as the catalogue names them, to advance the front standard along the runners. There is a focus scale with an infinity lock, but for precise focusing, this is rather more difficult as I found my hand partly occluding lens as I attempted to move the standard into place. As well as a hood, my camera was also missing the ground glass screen itself, so I made a replacement, although I used too coarse a grade of grit to see the projected images very clearly (incidentally, to make the replacement screen I had to cut down a glass plate for this, as the screen is smaller than quarter plate size). Camera movements are limited to front rise/fall and cross, like most folding plate cameras of this age. The body also has standard tripod sockets for vertical and horizontal orientation.

The Beck Symmetrical lens has a mark for f8 as its widest opening on the scale, but the aperture opens a little wider, as shown by the pointer's position in the image above, possibly just to f7.7. It does have a chip or crack at the very edge of the front element, but this probably has a marginal effect on image quality. The lens is set in a Lukos II three-speed shutter, with 1/25, 1/50, 1/100, with T and B. The Lukos is an 'Everset' shutter, meaning that it doesn't need a separate lever to cock the shutter before firing, but the tensioning of the mechanism can be felt in initially pressing down on the release lever before it reaches the firing position. According to the 1914 catalogue, Lukos shutters were specially made for Butchers - although not specified, no doubt by Ica.

Having made a new ground glass screen and submitted the camera to some general cleaning and renovation, an excuse for shooting with the Cameo came with the announcement on Emulsive of the first #FP4Party. In one of my job lots of old film and plates, I'd acquired two boxes of 8.2x10.8cm FP4 from the 1970s: with 50 sheets to a box I was happy to sacrifice a few sheets to test the camera, and having used some 4x5 inch FP4 from the same source successfully, without testing the film itself. I shot half a dozen sheets at half box speed and used developing times for modern FP4 Plus - the sheet film being the previous iteration of Ilford's FP emulsion before the 'Plus' version.

As well as the FP4 film, I also shot some glass plates at the same time. Thirty years older than the FP4, I shot some Ilford Soft Gradation Panchromatic plates, dated to 1946, hand held, with the result that most were underexposed given the Cameo's slow lens. The plates would have been better for an extra stop or two, but the results are still good for a seventy-year old emulsion.

Without a spirit level or a wire frame finder, I had trouble keeping the camera level when shooting, and as a result, I have cropped some of the FP4 images, although with the glass plates the qualities of their distinctive edges would be lost, so I kept the scan of the whole plate, as above, despite the slanting horizons.

Included with the Cameo camera was a push-on supplementary lens, with little information to identify it, marked simply 'No.6'. Fitting it to the camera showed it to be for close up and wide angle use, the former mitigating the camera's limited, single bellows extension to get closer to a subject, the latter simply facilitated by placing the front standard a little closer to the camera body. With the supplementary lens it's critical to use the ground glass screen to focus, as the focus scale on the body no longer applies; for wide-angle work, the brilliant finder shows a slightly smaller angle of view, but using the finder itself isn't especially exact, so this matters little. The two images below show the difference with and without the supplementary lens, which isn't especially dramatic.

The difference when used for close up photographs appears more marked, with the two examples below both shot on Ilford G.30 Chromatic glass plates. In each case, the front standard of the camera was advanced as far as possible on the runners, right at the very edge of the folding bed.

Although not used for any of the photographs in this post, the Cameo also came with two exposure meters of a very specific kind. The two wallet-like items are actinometers and work by timing how long a piece of sensitised paper takes to darken to a specific tint; that time is then applied to the calculator, which is calibrated to emulsion speed in Hurter and Driffield numbers. Possibly around a hundred years old, I found that the sensitised paper still darkened when exposed to light; some of my old glass plates are rated in H&D numbers, but most of the photographs in this post were shot with the 'sunny 16' rule rather than metered (I used an SLR to meter the close up shots and overexposed most of them). 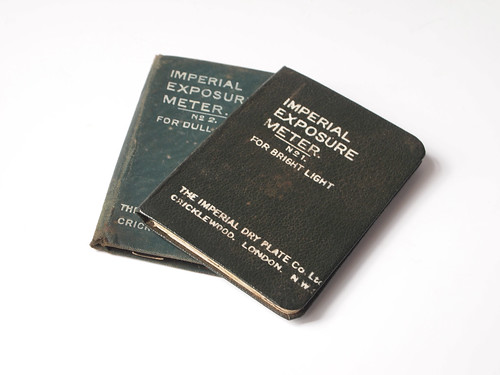 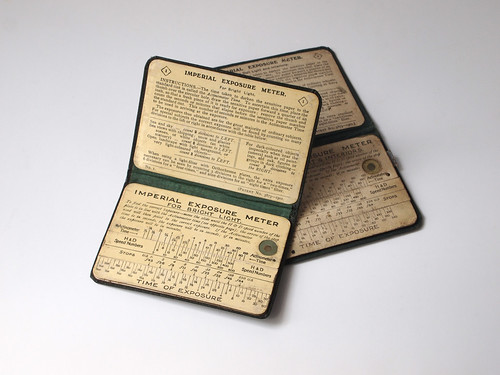 A century ago, the Cameo would have given quite adequate results on glass negatives for photographs that would have mostly been printed by contact. The Beck Symmetrical lens is sharp in the middle, but definition falls off towards the edges at wider apertures, and for some of the reasons I've mentioned, the Cameo isn't the easiest plate camera I've used: contemporary to my camera, more expensive models in the range with better, faster lenses, double extension bellows and rack and pinion focussing would be more desirable - if one were to make an informed purchase.


Sources/further reading:
There's perhaps surprisingly little in depth information about the Cameo online, although presumably sold in tens or hundreds of thousands, this may be simply that it's not considered sufficiently interesting in any way.
1914 Butcher Catalogue
'Pocket' Cameos on Historic Camera
Early Cameo model on The Living Image
Posted by Nicholas Middleton at 09:00