A couple of weeks prior to yesterday's Worldwide Pinhole Photography Day, I was given a Flights of Fancy pinhole photography kit, as well as an already constructed camera, which must have come from a second kit. The box itself contains everything necessary to build the camera and shoot and develop paper negatives: six sides of fibreboard that slot together to make the camera, a cover for the pinhole, a cardboard insert that the user pierces for the pinhole and which also holds the photographic paper, included, against the back of the camera for exposure. The kit contains three plastic trays, tongs, developer, fix, red gel to make a safelight and a booklet with a potted history of photography and full instructions. Although it's possible to use the camera simply held together with rubber bands, the constructed one had been glued. For the photographs, I used an already opened packet of 3x3-inch variable contrast paper which must have come with the kit of the already-constructed camera.

I hadn't made any tests before using the camera yesterday; I also did not measure the pinhole to ascertain its f-stop, and simply made exposures based on the guidelines in the instruction booklet; the weather was mostly overcast and the recommendations given were for 60 seconds 'overcast', or two minutes for 'dull daylight'. Rather than use the trays and chemicals provided (the developer bottle rattled when shaken, indicating that some of the chemical constituents had crystallised), I stand developed the paper in Ilfotec LC29 diluted 1+100, for one hour. The instructions with the kit suggest making contact prints on the paper provided; I scanned the paper negatives instead, and these scans were inverted with Photoshop to create positives.

For a beginner, within its limitations, the Flights of Fancy pinhole kit might be a worthwhile introduction to pinhole photography. Although the exposures I'd estimated were not all that accurate,  I've posted the images here as I was following the guidelines provided with the kit, rather than relying on experience, partly to test the instructions. I can also envision a few ways in which the kit could also be modified - a metal pinhole rather than black card, better seals to prevent light leaks, and a tripod fitting, for example (I rested the camera on any flat surface available during exposure, and the rubber band, around the whole body to keep the top secure meant that it did not sit entirely flat, leading to the camera shake seen in the second to last image above).

However, needing to unload and reload the Flights of Fancy box camera in a changing bag for each shot meant that I only exposed four sheets of paper with it over the course of the day; I also used a pinhole lensboard on my MPP Micro-Technical Mark VIII to shoot some paper negatives and a roll of medium format Ilford HP5 Plus. With HP5 Plus, the exposures were metered and measured out in seconds rather than minutes, the paper needed considerably longer. The weather was mostly overcast, with some very brief sunshine, at the tail end of a storm that had passed over the UK; for some shots I was concerned about wind shaking the tripod, although the softness of the pinhole images probably disguises this more than adequately.

For the paper negatives with the MPP, I used a home-made 9x12cm-to-4x5 inch adaptor; I had originally made this to use the Rada rollfilm back on the MPP with a 6x6 mask, but 9x12cm plate would also fit. Shooting long exposures outside showed that this was not especially light-tight when the darkslides of the holders were removed, and some of the paper negatives were spoiled with light leaks, present on the two images shown here to a greater or lesser degree. The paper I used for these was from an old box of grade 2 Ilfospeed resin coated paper which has a label dating to 1977; I also flashed the paper in the darkroom. As with the Flights of Fancy camera, the 9x12cm paper negatives were stand developed in Ilfotec LC29 diluted 1+100, for one hour, as a means to reduce contrast further.

In the past when using a pinhole with the MPP Micro-Technical camera, I have tended to position the lensboard at a 'normal' focal length (150mm-180mm); when shooting yesterday, I used 50mm-75mm, partly to facilitate shorter exposure times. Although both the 9x12cm paper negatives and the rollfilm represented some cropping on the 4x5-inch format, the 6x9cm frames of the latter considerably so, at these focal lengths, all the shots could firmly be defined as wide angle. I very rarely use wide angle lenses in any format, and I did find it hard to compose the shots with this in mind; however, with the relatively short exposures provided by using HP5 Plus - in comparison to the paper negatives - that the skies have relatively good definition (which in retrospect could have been improved using a yellow filter with little effect on exposure times) almost certainly adds structurally to what the compositions are lacking in the subject matter, the one exception from these considerations being the shot, immediately below, of a tree, where the wide angle emphasises the splaying of both roots and branches.

Posted by Nicholas Middleton at 21:54 No comments:

I wrote my original post about the Rollei 16 subminiature camera after a moderately intensive period of using the camera during which, as I did not have any of the Rada 16 cassettes for the camera, I could only shoot one roll of film before needing to unload the camera in the darkroom or darkbag. Unlike many other subminiature cameras using 16mm film, the Rollei 16 is loaded with a single cassette into which the film is rewound after being shot. The same cassettes were used for at least two other cameras, the Edixa 16 and the Goldammer Goldeck 16; however, these rarely appear in online auctions, and when they do are often priced highly. Having been looking for the cassettes for some time, I chanced upon an auction listing in which another Rollei 16 was being sold along with some rolls of unexposed film in the original cassettes. Winning the auction, I subsequently sold on the camera, and, as the cassettes were loaded with film from the 1970s and 1980s, I waited for an appropriate occasion to use the films. This was 'Expired Film Day' last month.

There were four rolls of film that came with the camera I'd bought: two boxes with 100 ASA colour negative film (which was Vericolor II Professional Type S) with a develop before date of August 83; and one box, a 'twin pack' with two rolls - the box itself was labelled as Ilford Pan F, develop before October 74, but one of the rolls inside turned out to be Ilfochrome colour transparency film. The black and white film box had a price label from a French shop, the colour films from a German one. The long four sides of the boxes (almost the same dimensions as a standard 35mm film carton) have the same information in German, French, English and Spanish; leaflets inside are also in Italian and Dutch. The Vericolor films were in white plastic tubs very much like those which 35mm film now comes in; the films inside the Pan F box were in smaller metal screw-top containers, perhaps indicating their age from a decade before, as similar to the metal containers 35mm films were protected with. The Pan F box has the information "Packed by Rollei-Werke Franke & Heidecke Braunschweig West Germany", while the colour film boxes explicitly states "cut, respooled, repacked by Rollei-Werke [...] wholly independently of original manufacturer." This information could suggest that Pan F film was available in 16mm at the time, as it was only 'packed'; it is also interesting to note that Franke & Heidecke continued to support the Rollei 16 at least a decade after the second model, the Rollei 16 S, had been discontinued.

I happened to be in Gdansk, Poland on Expired Film Day this year, and dutifully shot the three different expired films there on the day (one Vericolor roll remained unshot); for the remainder of my time in Gdansk, I reloaded the cassettes with 16mm Eastman Double-X (I usually take a dark bag with me when travelling for more than a couple of days). The Rada 16 cassettes have a central spool with a white snap-in 'plug' that secured the tapered end of the original films; when reloading I simply taped the end of the film to this. The Rollei 16 requires perforations to advance the film, so one has to pay attention to the orientation of the film when taping and loading - perforations are at the bottom of the film when loaded into the camera.

When rewinding the film after shooting, the Rollei 16 revealed one more curious design decision: the rewind crank will only turn when the viewfinder is extended. Flipping over the rewind crank extends two pins which connect either side of a tab on the spool inside the cassettes; both ends of the spool have this tab, so it can be used either way around.

Returning from Gdansk, I had expectations that the Pan F film would most likely provide the best results: I had rated it at 25 and 12 EI to compensate for age, but after development, I pulled the film out of the tank to find the whole roll black. Possibly it had been unspooled at some point over the last four decades. This does not promise well for the colour films, which I haven't yet developed; in lieu of illustrating this post with images from Expired Film Day, other shots re-using the cassettes with Eastman Double-X will have to suffice. 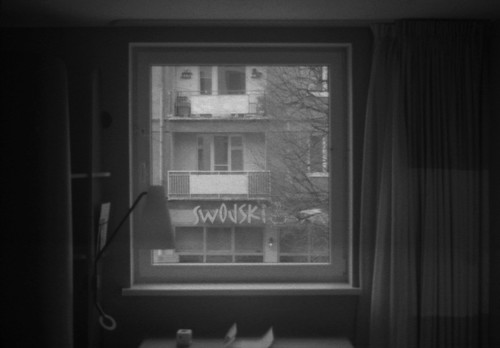 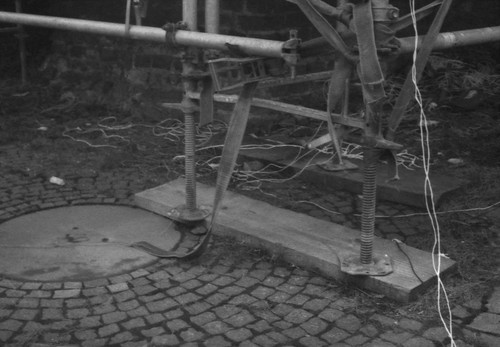 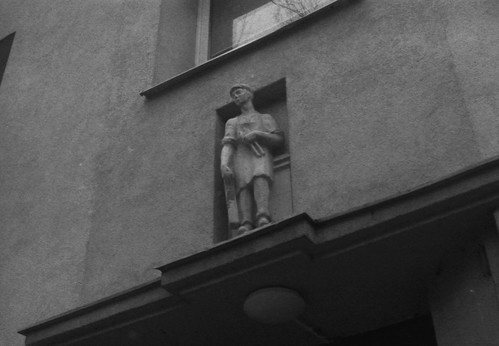 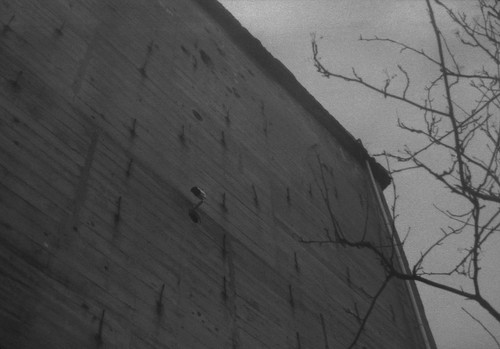 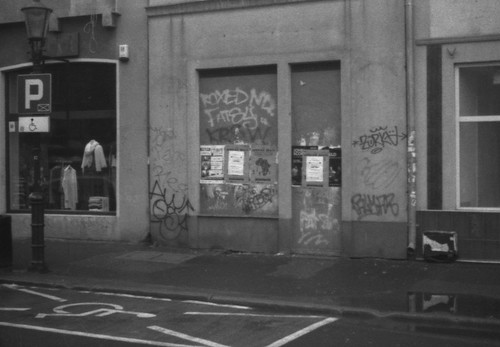 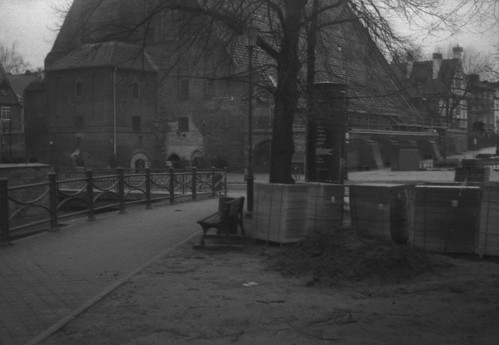 Posted by Nicholas Middleton at 22:25 4 comments:

There are many specifically film-based photography accounts on Instagram; I've added my own account under the handle parallel_movement. Over the years, I've selectively adopted different platforms (having written this blog for more than eight years with fair to regular consistency), but the main reason for not joining Instagram is that, at the time of writing, I don't have a smartphone and have no intention of possessing one in the foreseeable future. It is of course possible to run an Instagram account without a smartphone with some work-arounds; I've created the account in part to help promote the Undertow exhibition, open until 13th April (at Sluice HQ, 171 Morning Lane, London), in which I am showing a series of prints made in the darkroom - but as it's not a show about photography, and, as such, not everything I have been posting is just film photography - but a fair proportion is. I can't say how the account might develop, or how committed I feel towards it at this stage - but it exists. 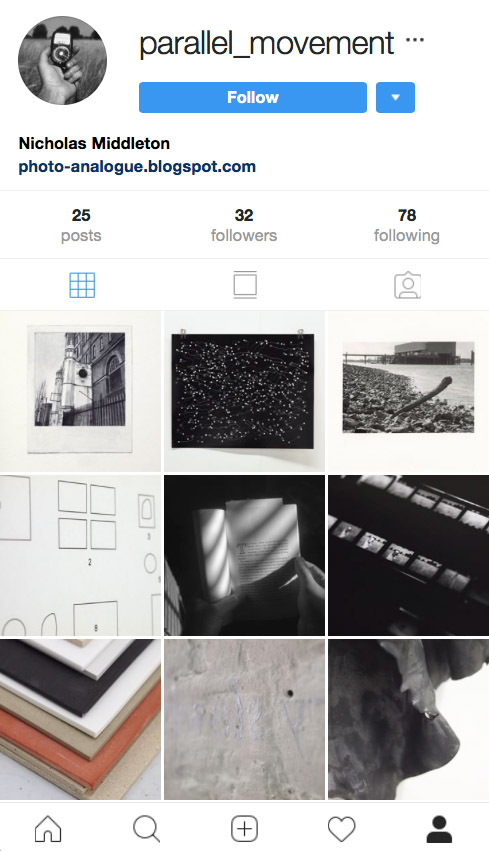 Posted by Nicholas Middleton at 21:31 2 comments: