After being awarded second prize for May's #ShittyCameraChallenge, shooting with the Wide Pic Panoramic camera for July's challenge, I wasn't expecting to be placed (my entries weren't perhaps as gimmicky as those with the Action Sampler in May) but when the results were announced, I found I'd come second again; July's first prize winner was @VisualSly - and there was a third prize this time around that went to @Grrlish (winning second prize - for a second time  - for some reason made me think of a Pot Noodle advert from the 1990s with Peter Baynham dressed as a Pot Noodle shouting out of a car window at a runner being left behind "SILVER! SILVER!"). July's 'mystery' second prize arrived today, again donated by @196photo and again all beautifully wrapped: another thematically-appropriate book of humour, Pring's Photographer's Miscellany, and, individually wrapped in an Analogue Wonderland box, another four different rolls of 35mm film, Fomapan 200, Kodak Gold 200, Ilford Pan 100 (which I used quite a lot last year), and there was again a roll of film new to me - JCH Streetpan 400 - as well as Ilford FP4 and HP5 badges - and a 'Pile of Poop' game. 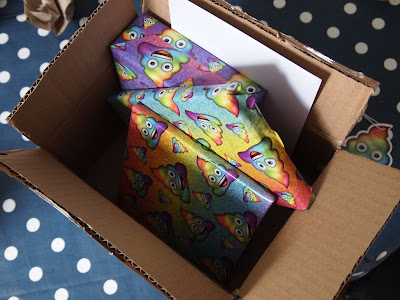 Posted by Nicholas Middleton at 19:08 No comments: