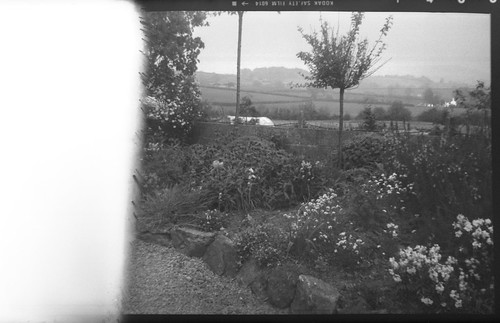 In looking for some 127 film in early anticipation of this Summer's 127 Day in a couple of months, I found a roll of exposed Kodacolor II film that came with a Kodak Brownie 127 and some unexposed rolls. Although Kodacolor II is a C41 colour negative film, not knowing how old the film was and not wanting to pay to develop the film commercially especially if there were no images on it (the roll was not secured with the self-adhesive tab), I stand developed it in RO9 One Shot, diluted to 1+100 for one hour. The negatives that resulted were thin, but relatively easy to get images from them in scanning. The negative frame sizes were eight 4x6cm frames on the 127 film - as one might have predicted, although the film was not in the camera itself, it's the right frame size and the images look exactly like these were shot with the Kodak Brownie 127, down to the evidence of a lack of film flatness in the somewhat wavy edges to the negative frames. One frame was completely over-exposed, including the rebates at top and bottom, with the two frames either side partially exposed - the two images at the top and bottom of this post - which looked exactly like the camera had been opened with the film still inside, partially used. 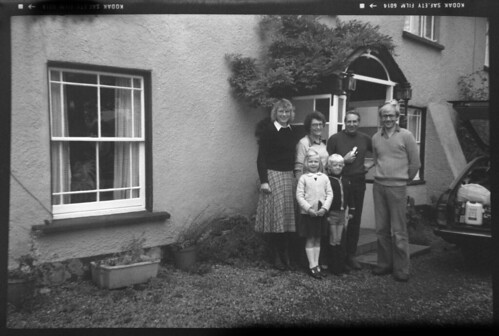 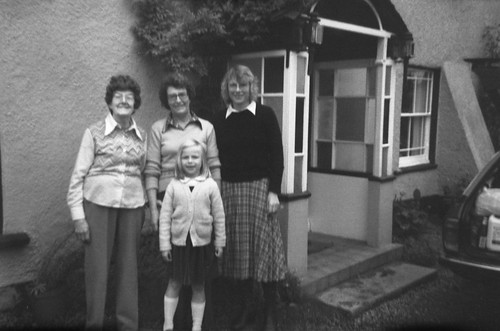 Two images show two portrait groups; the clothes look as though they date to the 1970s. Kodacolor II was introduced in different formats in 1973 after first appearing the year before in 110 format only. It was discontinued in 1982, which gives a possible cut-off date; it seems unlikely that these family photographs would have been taken after this date. Later on the roll is a vertical image of the doorway behind the figures. The top photograph, with an off-centre composition has been taken with a steadier hand than the second; the first photograph was presumably taken by the older woman in the left in the second who does not appear in the first. This second photograph with a little camera shake may have been taken by one of the two men in the first, although the older man has what looks like a 35mm compact camera in his hand, so this shot may have been taken by the younger man - or perhaps the small boy. The open back of a packed car just visible on the right hand side of the photograph suggests a family having just arrived for a holiday. 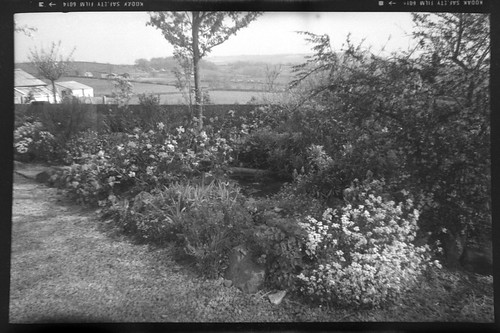 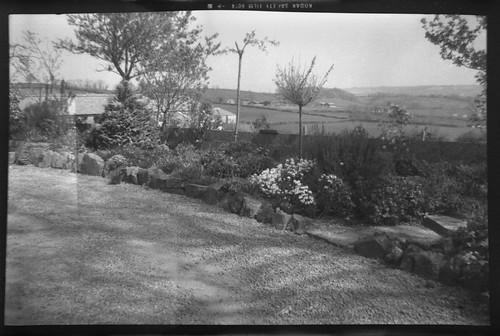 There are also three shots from similar angles of the edge of a garden with gentle hills behind. Separated by the shot of the front door, in sequence, the image at the top of this post appears to show a gap of time, with the first two images looking as though shot in spring, the third photograph of the garden has fuller foliage on the trees and the flowers appear different. The climber around the porch has also flowered in the image of it without the people. This sequence of images is redolent of the uses of photography in the domestic sphere, where a roll of film might be left in a camera for some time after being started, and the camera only coming out for special occasions, suggesting a family visit to the same place in Easter, and then a return in the Summer.

The final shot on the film is a van door, double-exposed, after the blank, over-exposed section. This van looks to be a relatively contemporary model, suggesting the first six frames were shot relatively close in time to each other, possibly on two separate occasions, then the film was left in the camera, later opened, with the realisation there was a film inside, and then the last photograph taken after this, twice, without advancing the frame. 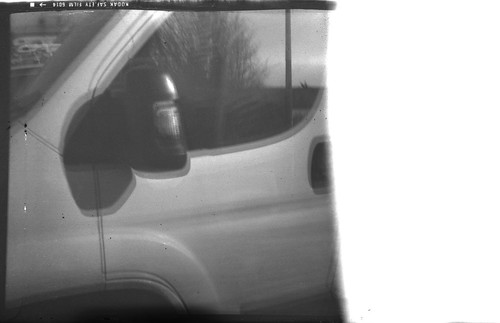 Posted by Nicholas Middleton at 19:09