Of all the camera-themed days on the contemporary film photography calendar, 127 Day is the one I observe most often, and not just due to it appearing three times a year in its different iterations. I used the Kodak Brownie 127 for last week's version. The camera came with three rolls of film, two unexposed (the third, which had been exposed, I had previously developed and posted under Found Film 4). I had intended to use the two unexposed films on the day, both probably around forty years old. One was wrapped in its original inner packaging, which had the Kodak logotype and gave me hope that it might just be Verichrome Pan, but it was simply another roll of Kodacolor II once unwrapped; the other roll had its sealing band intact which was in German and English and had the letters 'CN S' and the film speed given as 20 DIN/80 ASA, but no other indication of what film this was. 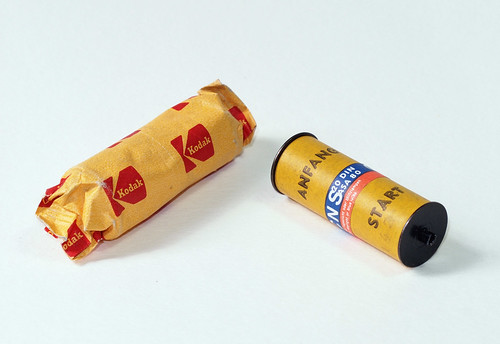 I shot this film first, which was a misjudgment on my part. After shooting all eight frames, on reaching the end of the roll, advancing the film became very stiff - and in attempting to force the advance knob on the camera to turn, this broke. The knob is plastic, but sits on a square-section metal spindle, and the plastic was brittle enough for two sides of its square cap to break off entirely. The cause of the resistance I felt when advancing the film was the fact that the backing paper had rusted to the original metal spool. The rust suggested that, as the film was unwrapped, at the very least humidity had got to the roll, not promising much for the photographs I'd just shot.

Information on the 'exposed' sealing band identified the roll as Agfacolor Special (the 'CN S' standing for 'Colour Negative Special'; Agfa introduced this film in 1968 and it was replaced by CNS II in 1975 according to the Agfa Colour page on Photomemorabilia). Due to its age, I stand developed the film black and white chemicals. As the Kodak Brownie 127 has no means of adjusting exposure, there was little I could do to compensate for the age of the film; only one image registered on the film sufficiently to scan it: I had pointed the camera directly at the sun mitigated by haze and a passing lower cloud. This image showed up as a faint positive on the film, not a negative as I had expected; this may just be the fact that with the film having a very dark base that did not clear on fixing, the negative density was sufficient to show up against this, very much as the principle behind the tintype.

Having unloaded the Agfacolor film, avoiding the Kodacolor roll, I loaded the camera with cut-down Ilford FP4 Plus; there was just enough purchase with the broken advance knob to wind the film through the camera, though this became increasingly difficult as the film ran through the camera, and I had to put more force on the knob: each time this slipped, rather than turn the metal spindle, the plastic was abraded against the metal. As it was late afternoon into the early evening when I shot the roll of FP4 Plus, in development, I pushed the film one stop to compensate, which mostly worked well, even providing some shadow detail in one interior shot I made.

I risked one final roll, some cut-down Ilford HP5 Plus. Shooting this inside, in moderately low-lighting conditions, I pushed the film three stops on development; this gave rather underexposed images, as I had thought might be the case, but these had just enough information to scan them. The problems with advancing the film with the broken knob had become bad enough that I only shot four frames before I was unable to advance the film any further.

In hindsight, both the old colour negative 127 films would have been better saved for a camera in which I could adjust aperture and shutter speed to increase exposure, compensating for the loss of sensitivity with the age of the films; I might not then have broken the film advance on the Kodak Brownie 127, and, perhaps, I might have found myself with a better set of photographs from the day.

Posted by Nicholas Middleton at 22:02