Last Summer, I was shooting some digital video on the very outskirts of London. It was a location where I had once drawn the scenes in front of the camera in a sketchbook many years before. While recording the landscape, I noticed smoke rising from the near horizon.  It was close enough that I abandoned what I was doing, and, following the footpath I knew would take me towards the smoke, I emerged onto a large field of stubble beside the path to find the far edge of it and the field beyond on fire. Fire engines had arrived, and were arriving, the flames were being beaten out while leaping up elsewhere, creeping across the field to where I was standing. This encounter with the present made me think that the project I had been engaged on - looking back at the landscape through the drawings years ago - lacked the immediacy of the present: that present, last Summer, was the most sustained heatwave in the south of England for forty-two years, and had, at that point, continued for several weeks.

At the time, I had been looking at early cinema, and had come across accounts of observers, amongst the very earliest viewers of films, remarking at how the camera captured the movement of inanimate objects, and that this was a revelation. This led to the piece called Paper Cinema in which the idea of a film responding to these accounts was paired with the earliest observations of the formation of a projected image - that of the image of the sun during an eclipse projected through gaps in the leaves of a canopy of trees - and in my initial conception of this piece as a film, there would be a voiceover describing these two phenomena as they appeared on two screens. Having written the text for that voiceover, I realised that this was sufficiently conveyed without the necessity of the image to move: I made the piece as a two photographic prints, with the text as an integral part of the prints. The viewer could read these texts and their internal voice became the voiceover for the photographs they could imagine moving. In thinking back to that earlier piece, I visualised a static shot of uncut dried grass moving in a slight wind. This would be the content of a short film, a moving photograph, whose subject was the continuing heatwave.

I filmed this with the Canon Cine Zoom 512 on part of a roll of 8mm Orwo UP15 film with a ‘develop before’ date of March 1976 - the same year as the most prolonged heatwave before that of 2018, and which last Summer was inevitably compared. I had already used some of this film previously: despite its age, it only needed a small increase in exposure to counter the loss of sensitivity with the passage of time to record a visible image.

The process of filming had to take into account the technological constraints of using this film stock from 1976 to record the scene. I used a short length of film rather than all that was left on the reel, long enough to fill the universal developing tank's reel - and documented the process itself on the same film stock with the Mamiya-16 Automatic. One of the reasons for using this, beyond just being able to shoot the 16mm-wide 2x8mm film, was that the frame size with the Mamiya-16 Automatic is designed to take double-perforated film - as with the 2x8mm format. Other subminiature cameras use single- or unperforated film which would therefore show the perforations in the frame. For the 8mm ciné camera, I spooled around five feet onto a reel to use in the camera to shoot the scene, and a second, shorter length for the stills camera. As the 2x8mm film is passed through the 8mm camera twice, I framed two adjacent views for each pass of the film. In between, the film is removed from the camera and turned over to shoot on the other side; it is possible to do this in the dark so as to not expose the film to light, but the format was designed for this to be done out in the light, albeit subdued light; on a whole roll of film, the beginning and the end of the reel are treated as a leader and trailer and not intended to be used for filming, but with a much short length of film, I shot from the point of loading until the end, leading to the image being bleached out by the light at each end. The film could have been loaded, reloaded and unloaded in complete darkness, which would have meant taking a black bag with me while filming, but I wanted this bleaching-out to occur as it felt appropriate to the subject. I panned the camera between this two shots; with a small overlap, the two framings show adjacent views of the dry, uncut grass.
Documenting the process of the film’s making, I realised that this documentation perhaps revealed more than the film itself. When taking the still photographs, I had broken down the process into five components: the film stock; the lightmeter; the camera; the scene or location; and the film itself after development, hanging up to dry. Having documented the process on the same film, these images were printed in the darkroom. Each of these images required a caption. With the 2x8mm film from the Canon Cine Zoom camera developed as a negative rather than a reversal or transparency film for projection, I could also print images from this in the darkroom and made a sixth print of two frames from the two different shots of the film. This was scanned as a negative unsplit along the middle of the film, as would be the case if reversal development was used to produce a transparency for  projection. For the Undertow exhibition at Sluice HQ, the texts for each caption were shot on photographic film and were also printed in the darkroom to the same format, both images and texts being made from the same physical material and would, in format if not attention, have an equality when displayed. The text was first laser-printed to A3 size then photographed with a Canon A-1 with a 50mm lens and a close-up filter using 35mm Rollei ATO 2.1 Supergraphic film. I rated this at an exposure index of 6, and bracketed the shots to two stops over; this film I developed by inspection with RO9 One Shot at a dilution of 1+200. 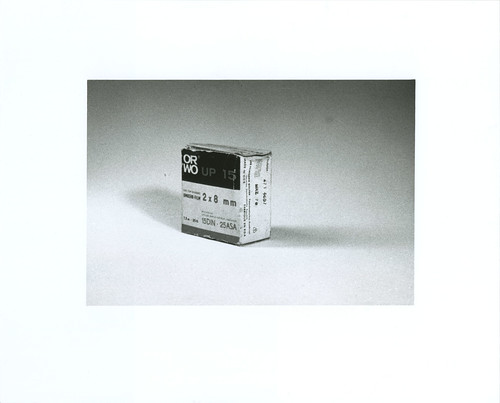 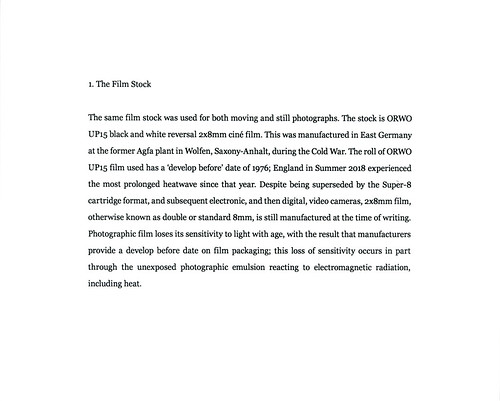 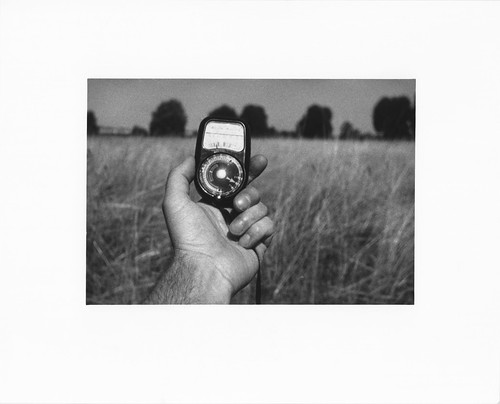 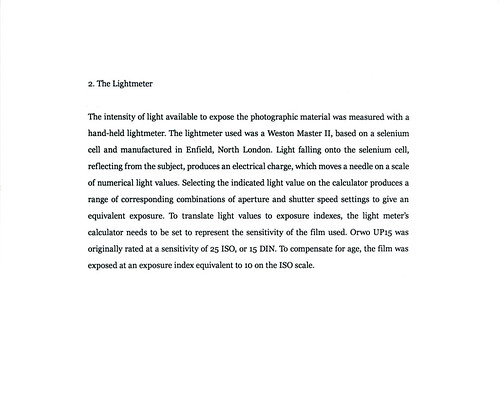 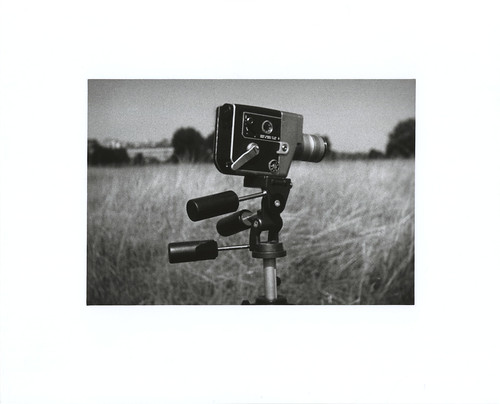 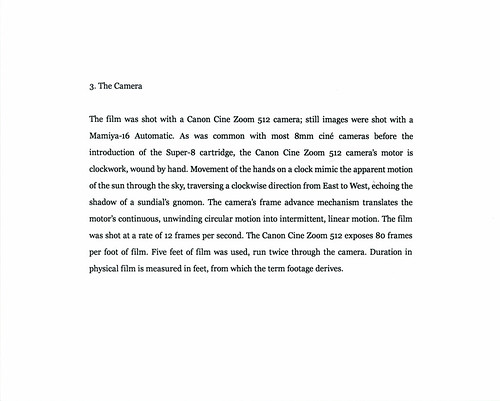 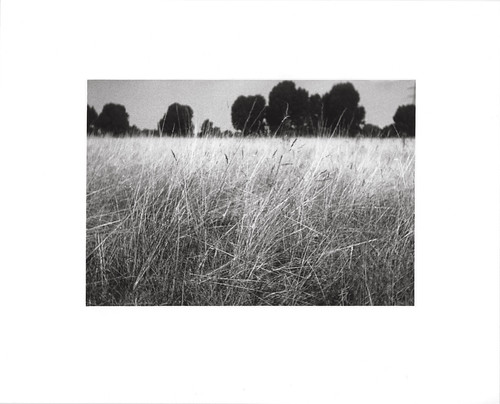 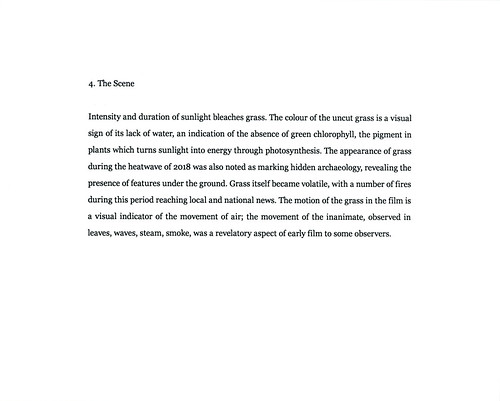 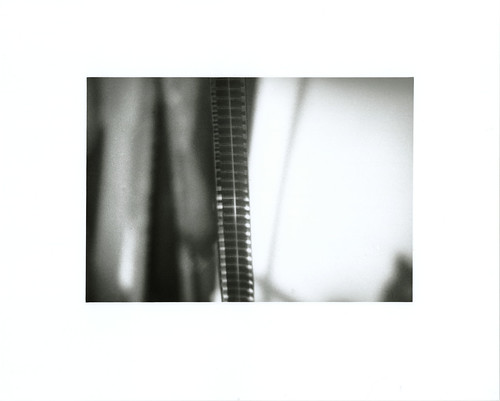 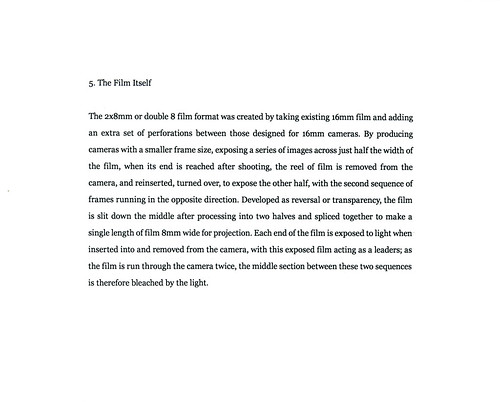 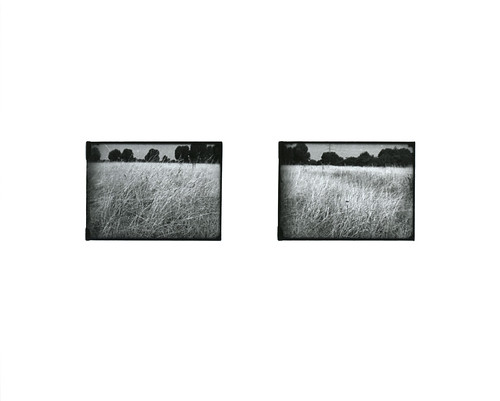 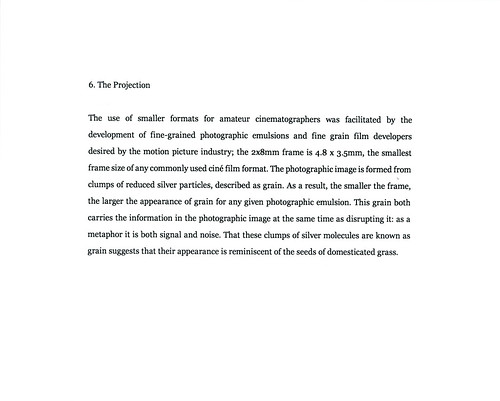 Printing the frames from the 2x8mm film in the darkroom required a mask with a folding baffle to expose one frame first, then rotated 180º to expose the second frame before development; the scale of the 8mm frames - a tiny negative of 4.8x3.5mm - was entirely dependent on how high the enlarger head could be extended. I had first printed a section of the film without the mask to determine the size and format of the mask that I subsequently made (as with negatives of the still photographs, I used the subminiature film adaptor which had come with the Kiev-30M camera, designed to fit into a 35mm enlarger tray, and keep the negative flatter than would be the case using it unsupported within a 35mm tray).


Making the film was a gesture at the contemporary, but became about the process, about the near-obsolete technology used. This technology has a relationship to the physical world that the digital lacks, and the caption texts reflect this: light sensitive material, the measurement of light, clockwork motion, the grain of the film. In exhibiting the photographs at Sluice HQ without the film, the descriptions point to something viewer is not actually seeing - and this admits the inadequacy of the medium to convey the physiological aspect of the heatwave. A narrative account in some form might have been able to use metaphor, description, a montage of visible signs but would still be inadequate. Again, with reference to Paper Cinema, this would have to be created in the mind of the viewer.

A shorter version of this post was published on the Undertow Research blog earlier this year. The Undertow exhibition was held at Sluice HQ London March-April 2019.
Posted by Nicholas Middleton at 17:49