One of my reasons for starting this blog four years ago was that I was becoming interested in cameras other than SLRs, and describing the experiences of using these cameras; in comparison, what I think of as classic film SLR cameras tend to be well-known and well-represented in blogs, articles and discussions on the internet, and that to add my own views might seem superfluous. However, for a couple of admittedly personal reasons, it seemed like perhaps time to add a post of my own on the Canon A-1.

My first 35mm SLR camera was a Praktica BC1, shortly to be replaced with a BCA body, which I used all through my student years and for some time afterwards; in 2001, with a small amount of money from a commission, I wanted to buy a more advanced 35mm SLR, but not the contemporary type of film cameras that were soon to give way to digital (in the 1990s, my Praktica was around a quarter of the price of a Canon SLR). Part of the reason for choosing the Canon A-1 was simply that I had been able to compare my Praktica against the A-1 of a fellow student at college, so a few years later it seemed an inevitable choice. My original Canon A-1 was stolen after a couple of years of use, but I replaced it with another some months later when I could afford to, and used it almost exclusively for about four or five years - mostly during the period when I didn't have access to a darkroom and shot colour or chromogenic black and white film. Part of the reason for writing a post about the camera now was a brief misconception that I had bought the camera a full fifteen years ago, before realising that it was fourteen years ago this month (the two shots below come from my first test roll); and it has been one of the cameras that I have been lending to students to use in an introduction to black and white film-based photography that I have been teaching - and being reminded of the quality of the results.

The A-1 was already several years old when I first encountered it, older than my Prakticas. Canon introduced the camera in 1978, two years after the innovative Canon AE-1, and it was produced until c.1985. In the original manual, the A-1 is described as:


...the most exciting and advanced camera on the market. Canon has good reason to have unbounded confidence and pride in the A-1. Embodied in this camera are the qualities of the finest SLR cameras and into it went the most sophisticated electronics technology available in the world today.

This quote from the introduction to the 100-page manual may well have been more than just marketing hyperbole: Camera-wiki's page on the A-1 states that "Canon's competitors were considerably slower in introducing programmed SLRs: Minolta in 1982 with the X-700, Nikon with the FA and Pentax with the Super A in 1983 and Olympus with the OM-2S Program in 1984."

The A-1's specifications were impressive for 1978: it has five automatic exposure modes plus full manual override: shutter speed priority AE; aperture priority AE; programmed AE (i.e. automatic selection of both shutter speed and aperture); AE flash photography with dedicated Canon flashes; and stopped-down aperture AE. The ASA dial has a very wide range from 6 ASA to 12800 ASA in third-stop increments, and provided with +/- two-stops exposure compensation, also with third-stop increments. The centre-emphasis TTL meter has an EV range from -2 to 18 at 100ASA. The viewfinder has an LED read-out for aperture and shutter speeds which automatically compensates for subject/viewfinder brightness. It also displays M for manual, buLb for 'B', and F or bu F for AE flash, with EEEE EE as an error message. In manual mode, the meter display shows the shutter speed selected on the Tv dial and shows the aperture (including intermediate half-stops) that will give correct exposure: the user then has to ensure that the aperture ring is set to this value - which does require taking the eye from the viewfinder. The LED read-out can be turned off using the collar switch around the battery check button on the left of the camera's top plate.

Additional features include: a stopping-down lever with a lock position (this lock position activates the stopped-down AE mode, which meters from the currently selected aperture, rather than at full aperture as in other AE modes); exposure preview (in addition to lightly depressing the shutter release) and exposure lock buttons on the left of the lens mount; a hot shoe with contacts for dedicated Speedlite flashes, and PC socket; and a built-in eyepiece shutter to prevent light entering via the viewfinder in long exposures. It also has a film reminder slot on the rear of the camera and a film plane indicator on the left hand side of the top plate.

The main user controls are all located on the right-hand side top plate. The main switch around the film advance is used to turn the camera on - at A - off - at L (for Lock) - and two self-timer positions for 2 and 10 seconds. There is also a multiple exposure switch next to the 10 second self timer position. Around the shutter release (with cable release socket) is the AE mode selector, the AT dial: Av selects aperture priority (when FD lenses are set to A on the aperture ring) with aperture values appearing in the window; Tv for shutter speed priority, with the window showing shutter speeds. These dial settings are colour coded: black numbers on yellow for apertures, with a range from f1.4 to f22; white numbers on black for fractions of a second, orange for whole seconds, from 1/1000 to 30 seconds, plus 'B' and P for programmed automatic exposure. These values are changed using the dial on the front of the camera, which also has a guard which can be raised to prevent accidental movement of the dial. All these functions can be operated by finger and thumb, which, together with the 'action grip' makes for an intelligent, functional ergonomic design: the lens mount is slightly offset to the left of the camera's axis, which balances it rather nicely in the hand. Aesthetically, the camera was only available in black, unlike a number of Canon's other SLRs around the same period, with numerals and lettering picked out mostly in white, with a few limited uses of colour. These choices appear to have made the design date less obviously than later Canon SLRs through the 1980s, notably the T series. 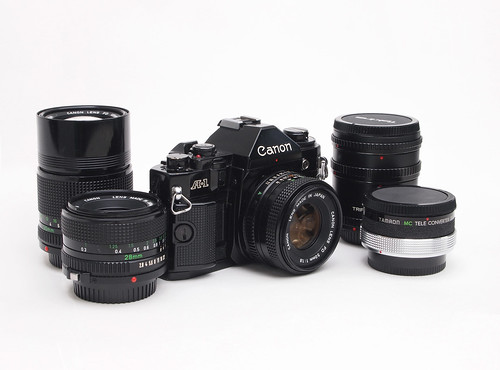 The Canon A-1 was designed to fit with all Canon's many FD, FL and R series lenses (with a few minor exceptions), and I acquired the common FD lenses, the f2.8 28mm and the f3.5 135mm; I did have a zoom for a time, but never took to using it. The f1.4 50mm lens and the faster f1.2 50mm lens are amongst the most sought after Canon FD fit prime lenses, and command high prices as a result; the standard f1.8 50mm lens that usually comes with the A-1 performs perfectly well. I also bought a (rarely used) extension tube set, and a 2x teleconverter. I was given a photocopy of the original comprehensive manual shortly after I bought the first A-1, useful to work out all the additional functions never or almost never used (I've never shot a double exposure with the camera, for example, and don't think I've ever really used the aperture priority mode). The manual provides illustrations of the many accessories provided for the A-1 and other Canon SLRs at the time, notably a data back, motor wind, magnifying eyepieces and so on. The only drawback to the Canon A-1 is that the electronic shutter is entirely dependent on battery power, a PX28 (although for others its fastest shutter speed of 'only' 1/1000th is also a cause for complaint). The electronic shutter can be a problem when a battery fails: many other SLR cameras of similar dates have at least one default mechanical shutter speed. On my current body, the battery door is cracked in two places - a common problem, looking at other descriptions online - but this is kept secure behind the action grip.

The Canon A-1 did (and continues to) live up to my expectations when I finally bought one, making the Praktica BCA look and feel very basic and primitive in comparison, although, for a first 35mm SLR camera, it had been both adequate and cheap (the secondhand price difference being much greater twenty years ago). In the course of writing this post, I've put a few more rolls of film through my A-1, and it's helped to remind me just how good the Canon A-1 is as a classic, manual-focus 35mm SLR camera.

Sources/further reading:
Canon A-1 on Camera Wiki
Canon's Camera Museum
The Canon A-1 manual
The Casual Photophile review of the Canon A-1
Photography in Malaysia's excellent Canon A-1 pages
Canon A-1 on Photoethnography
Posted by Nicholas Middleton at 13:26