In a box of Ilford Bromide Postcards, previously opened but subsequently taped shut, I discovered a stack of fifteen glass plate negatives. I had noticed that the box was unusually heavy, and what was inside was loose and sliding around; opening the box in a black bag, it was clear the box contained plates. Although the Ilford Bromide Postcards box came as part of the same lot as the plates illustrating my post, 'Found Glass Plates', these plates show different people and the houses are different, with clothing styles possibly later than those in the current post. There's some writing in pencil on the box above the label it appears to say "Glossy 1/-" and a squiggle; to the side of the label it has either "Mr Cousins" or possibly "My Cousins". There's also some writing in white chalk almost entirely rubbed away. All the glass negatives are in quarterplate size (10.8x8.2cm).

A loose chronology of the order in which the plates were shot isn't that difficult to establish. The photographs concern a house and an extended family - there appear to be family resemblances between many of the people portrayed, although some may be friends. Beginning with a newly built house (the disturbed ground around the house and the pile of sand suggest this) in what appears to be late Winter or early Spring, the sequence of plates appears to go through different seasons in the course of a year, although it's possible the plates may be from a few years close together. 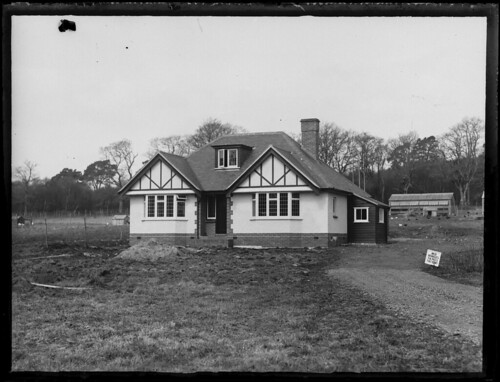 Stylistically, the house looks as though it dates to around 1930. The sign at right state "No vehicles to pass this point". In the background is a large henhouse, some chickens, and some smaller coops. There's a second plate which shows the house again, but this is some time later, a different time of year, and with a semi-circular step covered in broken tiles built below the existing brick steps in the first plate. Before the second plate of the house come a number of shots of people on the brick steps. 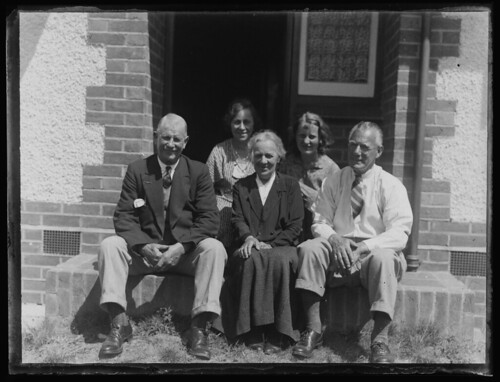 Apart from the woman at the back on the right, none of the other people reappear in the rest of the plates. However, there are four shots of people standing on the steps, three of which include her. These may have been taken on the same day, although the grass just visible in front of the steps appears shorter, and the woman is wearing different clothes, it's also later in the day, judging by the shadows - the group shot above looks like it was taken around midday. Of the standing plates, one has a man and a dog (the dog reappears in other plates), then two plates with the same man and the woman from the plate above, followed by one with the woman again and a different man. 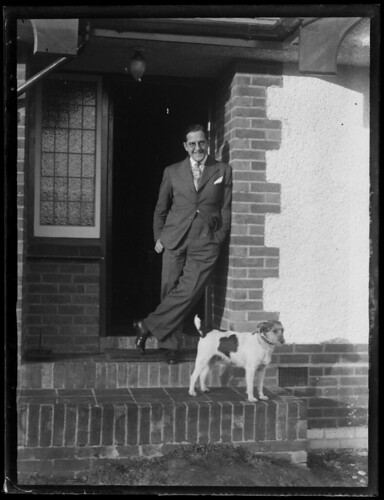 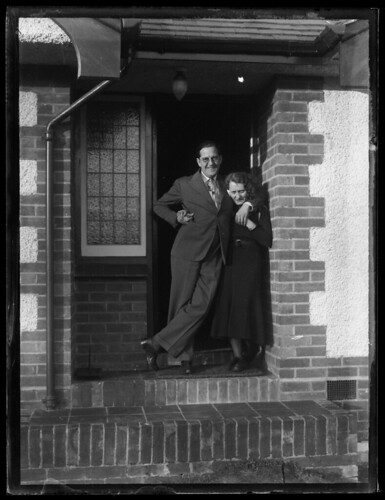 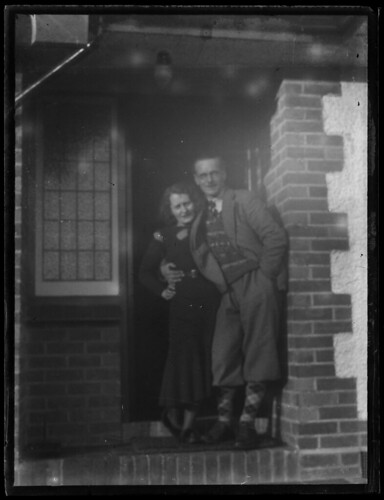 The man in the last shot in the plus-fours must be the photographer for the preceding three plates (of which I've only shown two), and presumably the man in the previous three plates shot the last one, moving closer in, and not changing the focus on the camera from before. The woman appears again in another shot in midday sunlight (with a different dress) on a bench with an older man and another woman. In the background to this shot are a number of wooden outbuildings which are to the right of the house in the first plate, just out of view - but may have been built after the house. 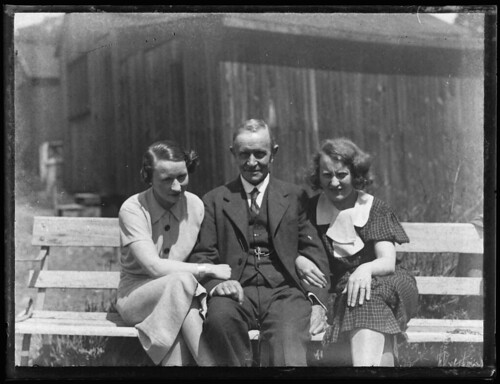 The nearest outbuilding is a garage. Two plates show a man, not appearing in other plates, inflating a tyre for the car inside. Another sunny day, this is later in the day than the plate above, and the long shadow in the second of these plates is from the chimney of the house. 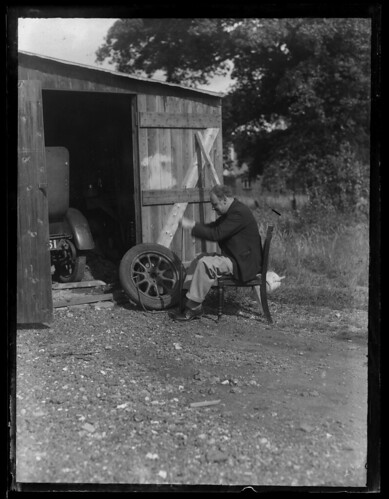 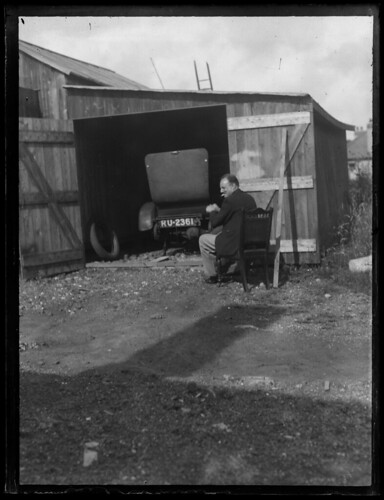 In the second plate, the registration plate of the car house can clearly be seen: RU-2361 (another house can also be seen in the background; otherwise, shots of the house itself make it look isolated). According to a search on www.newreg.co.uk, the number plate would have been issued some time between November 1924 and July 1929 from Bournemouth C.B.C. The car then appears in another group shot, where the woman from a number of the plates above reappears with the dog and some children. The tree behind the car is the same as that in the first shot of the man inflating the tyre, locating this as being outside the house again. The sign on the post is taller than that in the first plate, and facing in the other direction and the path can be seen to be edged with bricks. 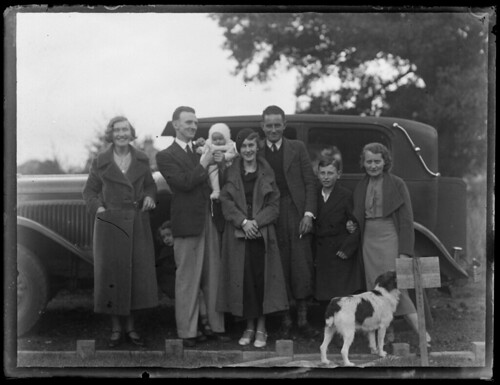 The house itself reappears in a sequence of three shots apparently taken on the same day. A plate of the house taken from the bottom of the drive shows the grass grown high around the house with flowers planted alongside it. The garage and tree can now be seen at the right. 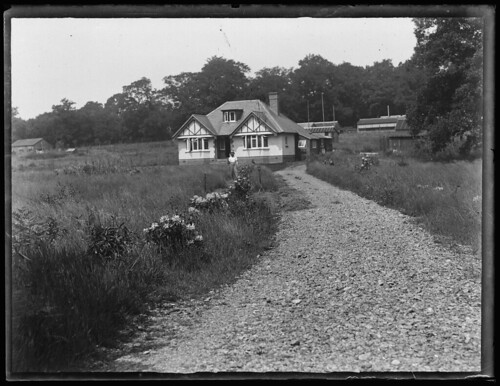 There's a man in a white shirt and braces with shears in front of the house, and a woman just visible beside the house. The next plate shows the man at work cutting the grass with the shears between two garden forks or spades planted upright (a second pair of shears is propped up on one of these, so the man may not be working alone). In the background can also be seen a third house in the distance. 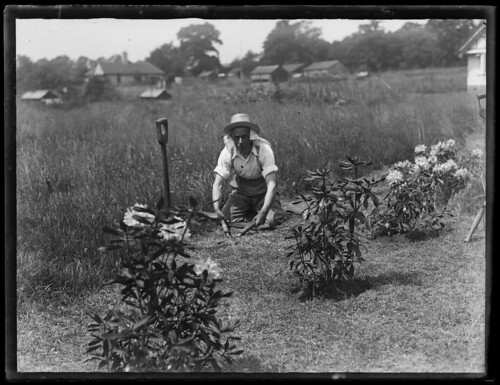 The last in the sequence of three plates shows the man in the same clothes but without his hat eating strawberries with the woman who appears in most of the photographs. They are sitting on the semi-circular step covered in broken tiles which doesn't appear in previous photographs of the front of the house. 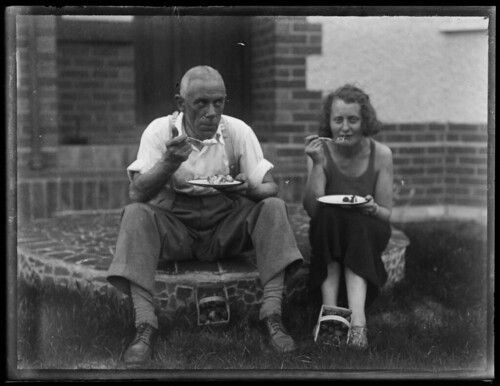 Finally, there are two plates shot from the dormer window of the house itself, looking down the drive in flood. There's a line of mainly bare trees which appear to mark the course of a stream or river, the cause of the flooding. The flowering shrubs alongside the drive can be seen and perhaps the area of shorter grass from the shearing in the above plates. A bench is on either side of the drive, that on the left just visible being the one use for the photograph of the three people earlier. At the very top of the drive is the brick edging seen in the photograph of the car, and an odd rock garden which looks new. In the second plate, the woman and dog appear on the drive. 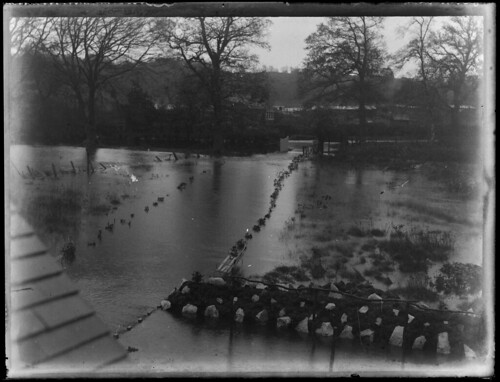 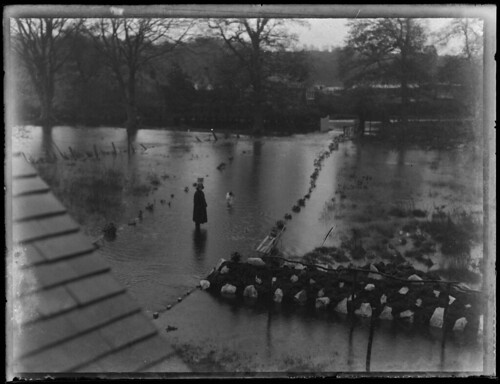 Posted by Nicholas Middleton at 16:30